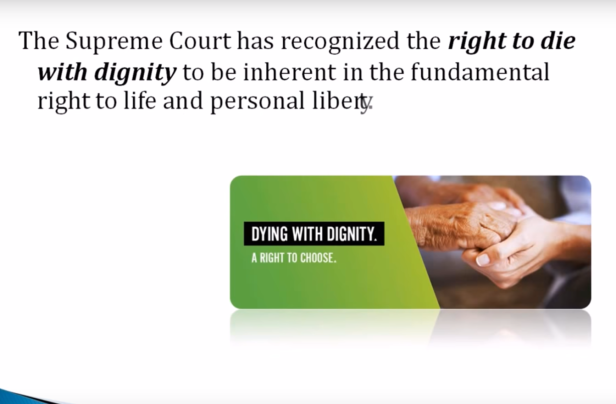 The Supreme Court has finally come out with a judgment clarifying the uncertain waters surrounding the concept of assisted suicide or euthanasia. By holding that the fundamental right to live also includes the right to die with dignity, the judgment brings to conclusion a long-standing ethical, moral, religious and legal dilemma. The Supreme Court had been known for its conflicting stand on this issue over the years. In the absence of any legislation to this effect, the judgment allows the terminally ill, comatose and brain dead to end their life with dignity through either a living will or a next friend.

Euthanasia – The Concept – Euthanasia refers to the painless killing of a patient, who is either in a vegetative state, comatose or suffering from a non-reversible, terminal disease. There are two types of Euthanasia which are broadly used in medical terms, active and passive. Usually administered through a physician, it is a form of mercy killing and hence raises a myriad question in the legal sphere. The answer to them calls for striking a balancing act between personal choice and the society’s interest in the life of a person.

Active vs. Passive Euthanasia – Active euthanasia differs from passive euthanasia in as much as in it death is brought about by an act of commission – for example, a person is killed by being given an overdose of pain killers or injecting a lethal dose of a heart stopping medicine. On the other hand, in passive euthanasia, death is brought by omission. In other words, by not carrying out any medical intervention to save the person’s life, withdrawing life support, removing from ventilator, etc. The Court has also distinguished between voluntary euthanasia and non-voluntary euthanasia in the sense that voluntary euthanasia is where consent is taken from the patient himself and non-voluntary euthanasia is where the consent is unavailable, for instances when the patient is in coma or is otherwise unable to give consent. In such cases, decision is taken either by a relative, called “next friend”, or if the patient had drawn a Living Will leaving specific instruction on how he is to be treated in such circumstances. For e.g., a Living Will sets down whether a man is to be resuscitated or not once his heart rate has flat lined.

In the words of the Hon’ble Supreme Court –

Euthanasia and the Supreme Court – The Supreme Court, in Gian Kaur vs. State of Punjab[1], clearly held that euthanasia and assisted suicide are not lawful in our country. The court, however, referred to the principles laid down by the Airedale case, where the House of Lords accepted that withdrawal of life supporting systems on the basis of informed medical opinion would be lawful because such withdrawal would only allow the patient who is beyond recovery to die a normal death, where there is no longer any duty to prolong life. Yet, it overruled the case of P. Rathinam vs. Union of India [2] wherein it was observed that criminalization of the act of suicide was inhuman and the right to life, in essence, includes the right to die. Later, in the landmark case of Aruna Ramchandra Shanbaug vs. Union of India[3], the Supreme Court allowed passive euthanasia in India, provided the circumstances were extreme. On 9th March, 2018, the Constitution Bench of the Supreme Court, in delivering its verdict on a PIL filed by Common Cause (an NGO) legalized passive euthanasia and the right to draft a Living Will thereby expanding the scope of Article 21 of the Constitution of India.

Snapshot of the crucial issues addressed by the Supreme Court in various cases :-

This article has been authored by Varnika Jain from Team LawSkills.

This site uses Akismet to reduce spam. Learn how your comment data is processed.